What is the difference between Xenon/HID systems and conventional halogen systems?

Xenon/HID systems use different principles in the creation of light than halogen. HID bulbs contain a small capsule with a mixture of xenon gas and halide salts that aid in the creation of a powerful light source that is generally 3 times brighter than halogen bulbs. Halogen bulbs use a filament that creates light from basic ohmic resistance across a filament. While halogen bulbs runs directly from the cars 12V system, HID bulbs require a complex ballast that can supply accurate high voltage.

What is the beam difference between ECE, DOT, JDM, and harmonized headlights?

How does a OEM Bi-Xenon system work?

Very simple, Bi-Xenon means that both high and low beam is created by the same HID bulb. A Bi-Xenon system can be based on reflector and projector design. The latter one is the simplest. Hella has a Bi-Xenon system that has a moveableshield inside a projector unit. This is acomplished by using a spring loaded solenoid (just like in power door locks) or servo motor with 2 positions. Bi-Xenon came on many cars in 2002.

The advantage compared to a traditional projector HID low beam/Halogen high beam is that you get HID low AND high beam. Bi-Xenon systems have additional flash-to-pass separate halogen lamps. Bi-Xenons System are a step up from regular low beam Xenons, since there will be better high beams. The high beams in a HID low beam HID/ halogen high beam combination has a tendancy to be degraded to a beam cutoff softener. It is easy to get spoiled by the powerful low beam HID which makes high beams with 65W halogen almost dim in comparison. They should have been 140W high beam. Bi-Xenons gives a better long distance view when high beam is on.

Bi-Xenons are not perfect either. Ideally, they should have made foreground lighting weaker when switching solenoids over to high beams. But that feature in non avail so far.

Use only OEM Bi-Xenon Systems, don't use any aftermarked Bi-Xenon HID Kits.

What differs left and right side headlamps?
Optically, there will be no difference. Left and right beam pattern are the same. Esthetically, left and right headlamp are of course mirrored, to make the front look pretty. Internal components (ballasts, projector units) is most often mirrored as well. Contents of components are the same, but mounting tabs, connector placement and so forth, can be mirrored.

In rear lamps, applications with red and yellow LEDs already are state of the art in lighting technology. In headlamps, especially white LEDs are necessary that for main functions must provide a better light performance. White LEDs have already been used for signal functions like position or daytime running light in some serial projects. With the development of the first Full-LED headlamp for Audi R8, Automotive Lighting set up a world premiere. For the first time, all light functions of a serial headlamp are being realized in LED technology, these are low and high beam, daytime running light, turn indicator and position light.
LED technology offers new opportunities for the future concerning styling, technology and energy consumption.

LEDs especially stand out for the following characteristics:
- the light temperature of the LEDs nearly achieve daylight quality
- an extremely high lifetime lasting more than a whole vehicle life
- a significantly lower energy consumption
- more effective opportunities for the use of installation space in   headlamps
- unique freedom and variety in styling for the development of brand   characteristic styling elements within headlamps

LEDs are based on semiconductor technology. The light is emitted directly out of the semiconductor substrate when a forward voltage is applied. The colour depends on the band-gap energy of valence and conduction band for the materials forming the semiconductor. The amber colour is directly generated by the LED by Aluminium Indium Gallium Phosphide (AlInGaP) semiconductor material. Through the luminescence conversion process, white light is generated. A blue diode in combination with an applied converter material, the colour blue and yellow, the combination of which is perceived as white light.

To achieve the targeted light patterns with LED applications in headlamps, two conventional opportunities are available that are already implemented in filament and also in gas discharge lamps. Either the light of the LED is redirected through a reflector in order to achieve the light pattern on the road. Or, alternatively compact systems can be applied that project the light in the street using a lens.
Due to their small sizes, LEDs offer the opportunity to combine both light systems for the first time.

In contrast to Halogen or Xenon systems, LEDs emit "cold" light meaning that no infrared radiation is being produced. Due to the high efficiency, 20% of the input energy are transformed into visible light (for comparison a filament bulb only transforms 5%) - the rest of the energy generates heat within the semiconductor chip. Luminous flux, colour and forward voltage are dependant on the temperature. As soon as the allowed temperature is exceeded, the lifetime of the LED will be badly affected or in worst case will be destroyed.
To protect the hottest part, the chip, cooling elements with a controlled air transportation system have been developed. The systematic direction of the warm air to the bezel of the headlamp is so simultaneously being used for de-icing and decondensation.

The application of LED technology significantly contributes to the avoidance of CO2 emission and the reduction of fuel consumption.
This aspect especially gains importance with the implementation of daytime running light (DRL). DRL with LED needs 14W of energy, whereas the use of conventional vehicle lighting at day (low beam, rear lights, position lights) consumes 300W.

LED technology within the external vehicle lighting is still in its infancy. Future fields of activity are to be found especially in the implementation of adaptive light systems and in the further optimization of energy consumption.

In September 2009 BMW sent out a press release telling everyone it was working on laser headlights for its cars. Nobody paid too much attention.

But we should have, because now that BMW has pioneered the technology in the automotive sphere (lasers have resided in many other aspects of our daily lives for years) the potential applications are exciting. And not only because lasers save fuel, create twice the visibility range of the next best thing and are (surprisingly) less blinding than burn-your-eyes-out LED and xenon headlights.

Being remarkably closer in ‘colour temperature’ to natural sunlight, laser headlights are far easier on the eye than the LED/Xenon combo with which that Audi blinded you with last night.

The best reason, however, why lasers are exciting is because ultimately its the headlights that make a car look incredible or incredibly dull, and lasers give car designers huge scope to play around, taking up far less space than conventional headlights. BMW, in fact, has been remarkably conservative with the design of the i8 headlights, preferring an understated, clinical look to something more flamboyant or aggressive. 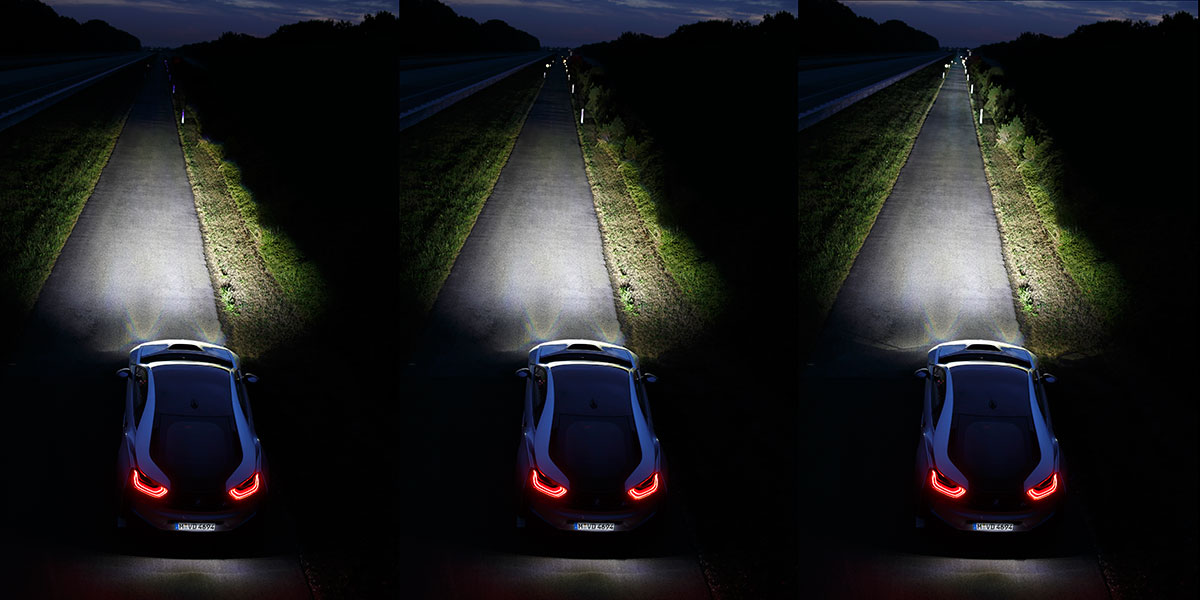 This image shows the different stages of the BMW i8’s new headlights, going, from left to right, from LED low beams shining 100m ahead, to LED high beams, which shine 300m ahead, and onto the LED high beams with laser light, which are capable of illuminating the road 600m ahead of the car.

No comments. Be first!
Only registered users are allowed to post